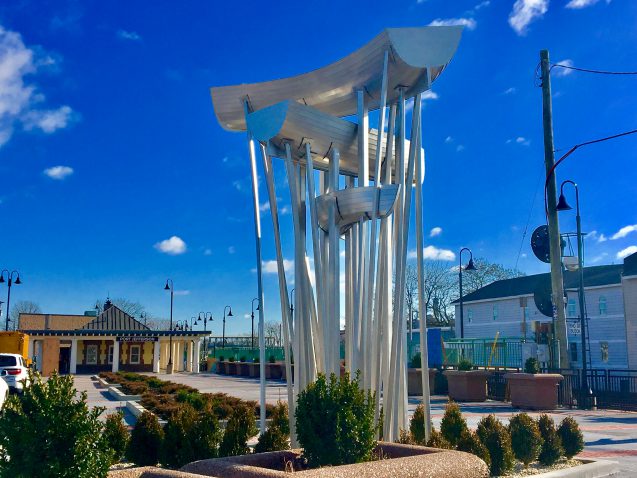 David McQueen’s sculpture, “…the vast and endless sea…” (2018), commissioned by MTA Arts & Design, has been installed at Port Jefferson Station. The sculpture has been placed in a landscaped pedestrian pathway linking Main Street to the station building and platform. It was fabricated by KC Fabrications.

The stainless-steel sculpture comprises three ships – a schooner, a yawl and a sloop – held aloft by 52 boat stands ranging in height between 12 and 22 feet; the ships are not at sea but in the process of being built. Each is a modified re-creation of those built in Port Jefferson during the mid-1800’s at the Bayles and Darling Shipyards. Using those plans as starting points, McQueen shaped each ship to curve, as if swimming through the air. The boat stands also curve, bending upwards to cradle each ship. 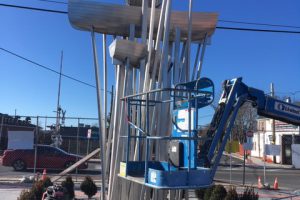 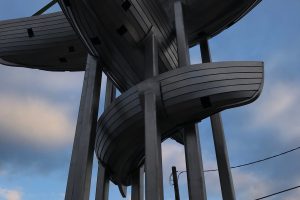 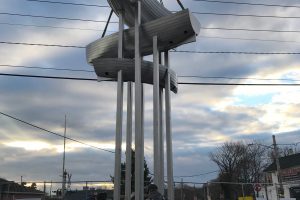 “I love the process of shipbuilding,” McQueen said. “First, there is the outright beauty of the lines and the rigorous engineering that draws the curves of a ship. Second is the potential that imbues the building itself. All building carries potential, but there is a specific romance in the building of ships, especially the schooners and yawls of Port Jeff’s past.”

“This was a great opportunity to commission art that speaks directly to a community’s heritage while providing a contemporary gateway for LIRR and the community,” said Lester Burg, Deputy Director, MTA Arts & Design.

McQueen developed his sculpture to honor the contribution of shipbuilding to the history of Port Jefferson. He focused on the actual types of ships built in the village and shaped them to “sail through its consciousness”. The title of the work is from this quote by Antoine de Saint Exupery, author of The Little Prince:

“If you wish to build a ship, do not divide the men into teams and send them to the forest to cut wood. Instead, teach them to long for the vast and endless sea.”