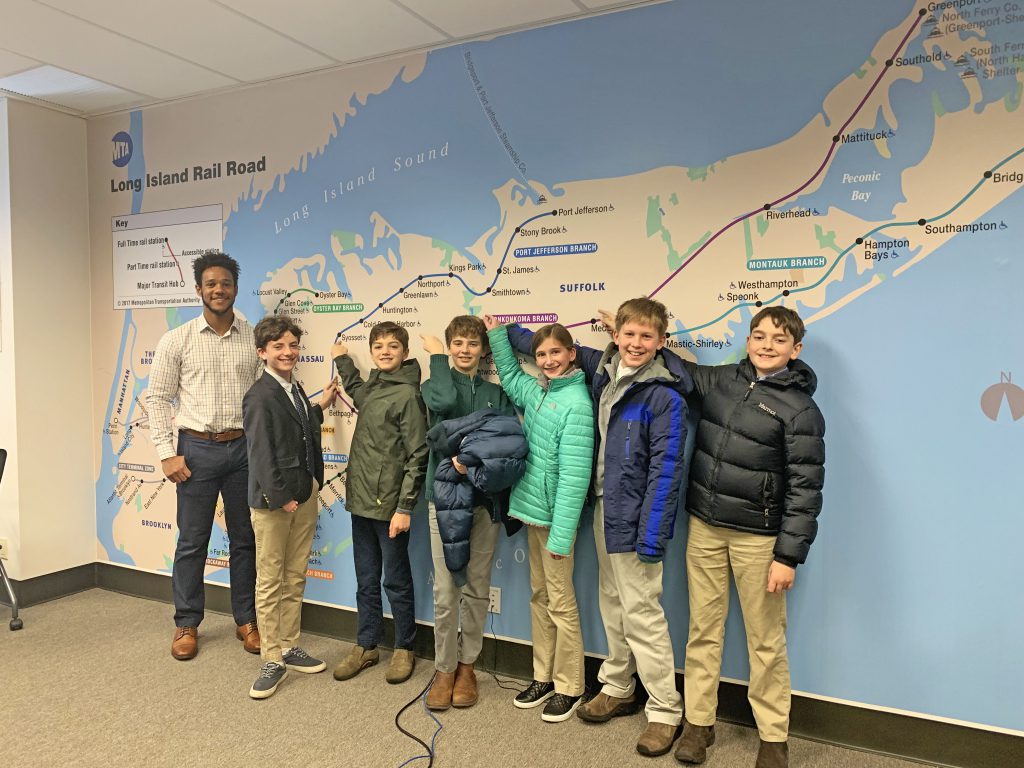 Alongside Expansion Project team member Dan Marcy, the East Woods School LEGO Robotics team points to their project’s location in Syosset on the map of the entire LIRR system.

In FIRST LEGO League, students are immersed in real-world science and technology challenges. Each team designs its own solution to a current scientific question or problem and builds autonomous LEGO robots that perform a series of missions. For this year’s “City Shaper” project, students are addressing a real-world problem related to cities – and to their own neighborhoods. They are encouraged to look at energy efficiency, living space, congestion, traffic or any factors that will help improve a building or a public space in their community. 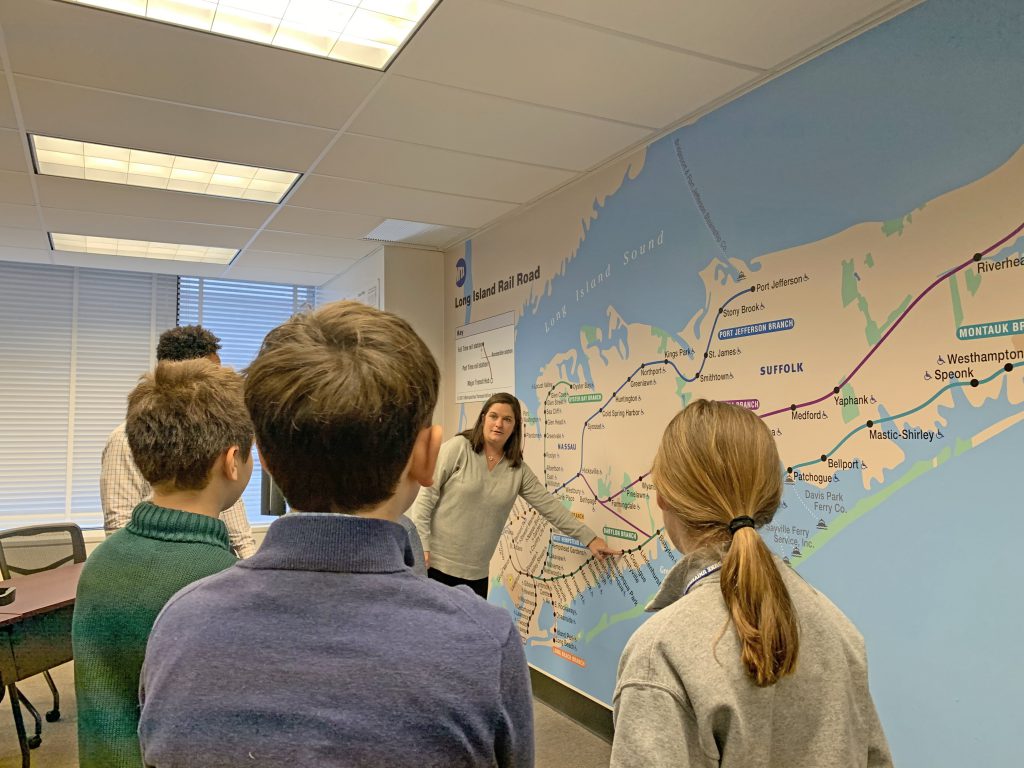 Robotics Mentor and EWS Science Teacher, Jeanne Lore, helps familiarize her students with the LIRR system and its importance to her and the greater Long Island community.

The students’ competition project aims to tackle traffic congestion in downtown Syosset, which they’ve attributed in part to an at-grade LIRR crossing, and the team is exploring the possibility of replacing the at-grade crossing with a vehicular overpass – the team has also researched building office space and apartments over the vertical air space available above the tracks around LIRR train stations. There was lots of overlap with the Expansion Project’s work and, therefore, the students asked a lot of intuitive questions, especially regarding underpasses.

After seeing the Urban Avenue Grade Crossing Elimination video, one of the questions was, “How do you prevent flooding in the underpasses?” The outreach team emphasized the importance of designing a drainage system that can handle the capacity of the area and discussed the creation of green, permeable spaces to reduce storm water runoff. Other complex factors considered in the discussion included the importance of community input, especially for nearby small businesses, as well as how to minimize the impact of construction on commuters. In dealing with a complex problem such as this, LIRR Expansion Project Deputy Outreach Manager Dan Marcy told the students, “things around you don’t have to exist the way they are currently.” 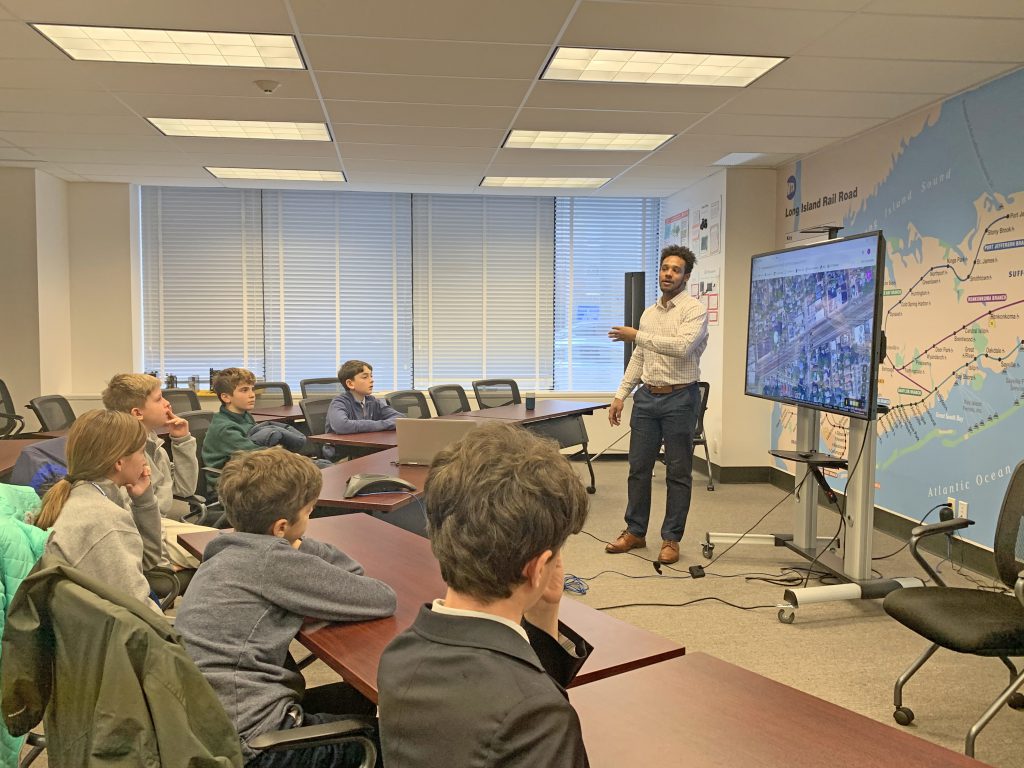 To help better understand and provide insight for the students’ project, the Outreach team examines a map of downtown Syosset and it’s at-grade LIRR crossing.

Prior to visiting the LIRR Expansion project, the team met with a member of their County Legislature and an Urban Planner to hear input on their initial research and ideas. Jeanne Lore, one of the EWS robotics mentors, said the program at the CIC was “so informative – the students were able to see what they’ve been thinking in real life!”

As the students were leaving, they were asked what they learned, and each one shouted either “Down!” or “Above!”, referring to if their project should include an underpass or overpass. It seems like they have lots of reconciliation to do, but hey, that’s part of the process! The LIRR Expansion Project Team knows firsthand. 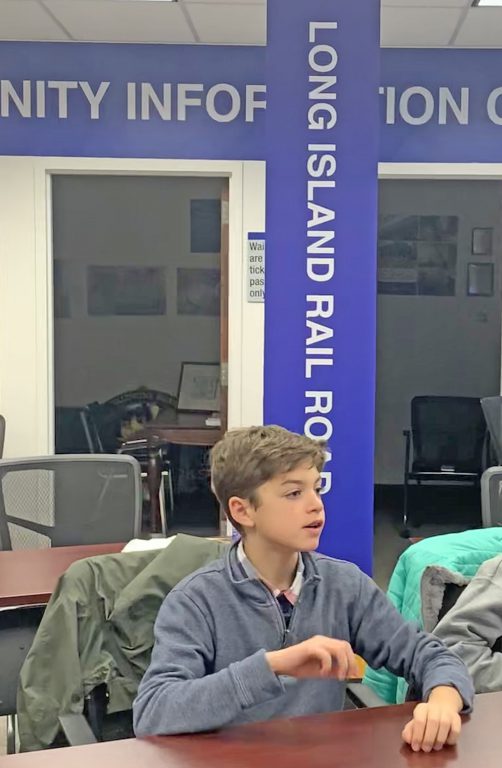 One of the EWS robotics team members asks, “How far back do you have to start construction when building an underpass? How about for an overpass?”

For more information about the LIRR Expansion Project Floral Park to Hicksville, please visit the project page on AModernLI.com.