Opened to the public in February 1913, Grand Central Terminal is a story of great engineering, survival, and rebirth. In 1978, architect Philip Johnson and First Lady Jacqueline Kennedy Onassis secured landmark status for the Terminal, ensuring the building would serve New Yorkers for generations to come. 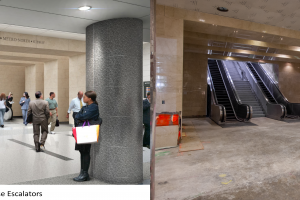 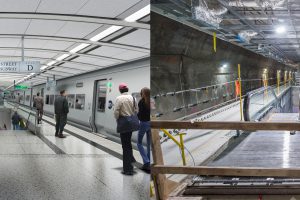 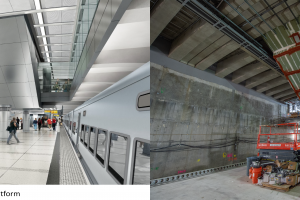 One of the largest transportation infrastructure projects currently underway in the United States, the East Side Access Project will provide new, direct Long Island Rail Road service into a new concourse below Grand Central, bringing LIRR customers to Manhattan’s East Side for the first time in history.

MTA Construction & Development architects, designers and engineers bringing this project to fruition are bringing their love for Grand Central to the final design of the new LIRR passenger concourse, and beautiful new glass and marble finishes are being installed in preparation for the completion of the project and the arrival of LIRR trains at Grand Central by December 2022. As you can see in these recent photos of the concourse, juxtaposed with renderings, MTA C&D and LIRR is creating a 21st century transit destination while honoring the aesthetic of one of America’s great architectural achievements.

East Side Access is an integral component of the broader LIRR system expansion initiative to help reduce passenger crowding, train congestion and automobile traffic, and to provide connections with additional regional transportation options such as Metro-North Railroad and New York City Transit subways; East Side Access will also alleviate train and passenger congestion at New York Penn Station and its neighboring subway stations. Passengers traveling from Midtown East will enjoy easier access to JFK International Airport via the AirTrain at LIRR’s Jamaica Station. When completed, East Side Access will serve approximately 162,000 customers a day, providing them with a faster and easier commute from Long Island and Queens to the east side of Manhattan in a new eight-track terminal and concourse below Grand Central Terminal. For more information, please visit the East Side Access project page on AModernLI.com.