On Monday, February 3, 2020, the LIRR Expansion Project team eliminated the New Hyde Park Road grade crossing. Design-build contractor 3rd Track Constructors (3TC) blocked off the segment of New Hyde Park Road between Plaza Avenue and 4th Avenue before the morning rush, and the crossing gates went down at 9:58AM for the last peak period train. You can watch the video here:

At exactly 9:59AM, the Railroad officially closed the New Hyde Park grade crossing through issuance of a General Notice, which indicates to operating personnel there is no longer an active grade crossing at this location and they don’t need to blow their horn every time they pass. LIRR crews then began decommissioning and removing the signal appliances, including the bells and gates. 3TC is now building an underpass, so cars and pedestrians are separated from the trains. We’re making the area safer and quieter, and improving the reliability of the Railroad.

Also on February 3rd, temporary 10-car platforms opened along 2nd and 3rd Avenues so that work to modernize the New Hyde Park station can commence. The northern and southern temporary platforms are located between South 12th Street and South 8th Street, and include eight ADA-compliant ingress and egress points, with three ADA-compliant access ramps. Pedestrian detour routes are in place to help commuters access the station from the east and west sides of New Hyde Park Road.

Major construction is now underway at the project. Support of excavation walls are being installed on the south side of the right of way. 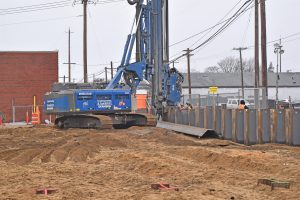 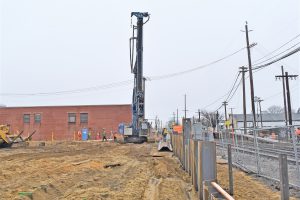 Excavation is ongoing on the north side of the right of way. 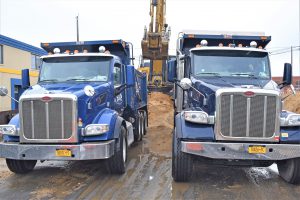 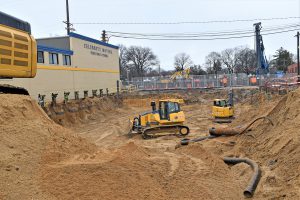 A new bridge to span this crossing is scheduled to be moved into place this summer, on July 11-12. New Hyde Park Road will reopen in the summer of 2020 with a new five-lane roadway and pedestrian sidewalks beneath the tracks, and the new underpass will improve safety and railroad reliability. This fast pace of work and the use of unique engineering methods will limit the detours to just seven months. Detour routes have been established in cooperation with Nassau County, the Villages of New Hyde Park and Garden City, and other localities. As alternatives, the detours encourage the use of Covert Avenue, which reopened last Oct. 12 after the MTA eliminated the grade crossing, and Nassau Blvd. where, over the weekend of Oct. 5-6, the MTA replaced the previous bridge that had a low clearance of just 11’6”, with a new bridge with a higher clearance of 14’0”. Detour routes are clearly marked by signage.

The project will alleviate train congestion and improve vehicular traffic. As part of an unprecedentedly robust community outreach program, MTA, LIRR and the design-builder have held hundreds of meetings in advance of the closure. Most recently, the project team has hosted multiple public information sessions, in addition to targeted stakeholder meetings with residents, school districts, chambers of commerce, civic associations and more.

This railroad crossing is the third of eight such grade-crossing elimination projects being completed under the LIRR Expansion Project, also known as “Third Track,” set for completion in 2022. The grade crossing eliminations will enhance safety, reduce noise and air pollution and reduce traffic back-ups, as vehicles will no longer need to wait at crossings as trains pass, which can be as much as 42 percent of the time during rush hours. Stations along the Main Line between Floral Park and Hicksville are being rebuilt to accommodate a new third track. Once the grade crossing is eliminated, trains will no longer need to blast their horns, and bells from crossing gates will become unnecessary, significantly reducing noise pollution in the surrounding area. Currently, crossing gates during rush hours are in the down position nearly half the time, creating traffic backups and increasing exhaust from vehicles.

The construction of a third track from Floral Park to Hicksville will reduce train congestion and delays and enable true bi-directional service during peak hours with a more reliable rail network. This transformative work includes several related projects, including accessibility improvements, the removal of eight street-level grade crossings, the construction of parking garages, the installation of retaining and sound walls and improvements to rail bridges. As work is completed local communities are seeing immediate benefits, and construction is being managed to minimize the impact on daily routines, with extensive mitigation and public outreach. For more information please visit the LIRR Expansion Project Floral Park to Hicksville project page on AModernLI.com.