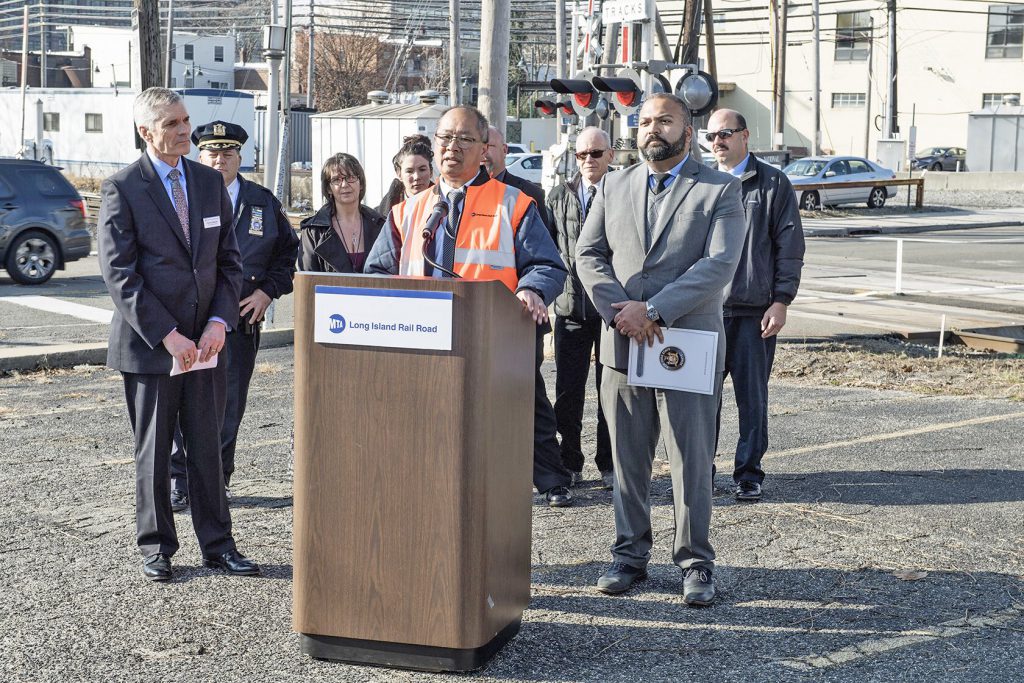 The LIRR has been recognized by the Federal Railroad Administration (FRA) for a program that has dramatically improved railroad safety through flexible delineators at railroad crossings and enhanced GPS alerts. The FRA is recommending other American railroads review research on the LIRR program and consider making similar upgrades at problematic areas.

Flexible delineators are designed to “delineate” traffic or guide traffic into a specific lane – they are made of durable plastic and come in tubular and flat panel designs in a variety of colors and with reflective sheeting. The LIRR delineators and a partnership with Google/Waze have, in their first year, virtually eliminated the problem of motorists inadvertently turning onto tracks, which until last year had been happening with increased frequency, approximately 21 times per year. 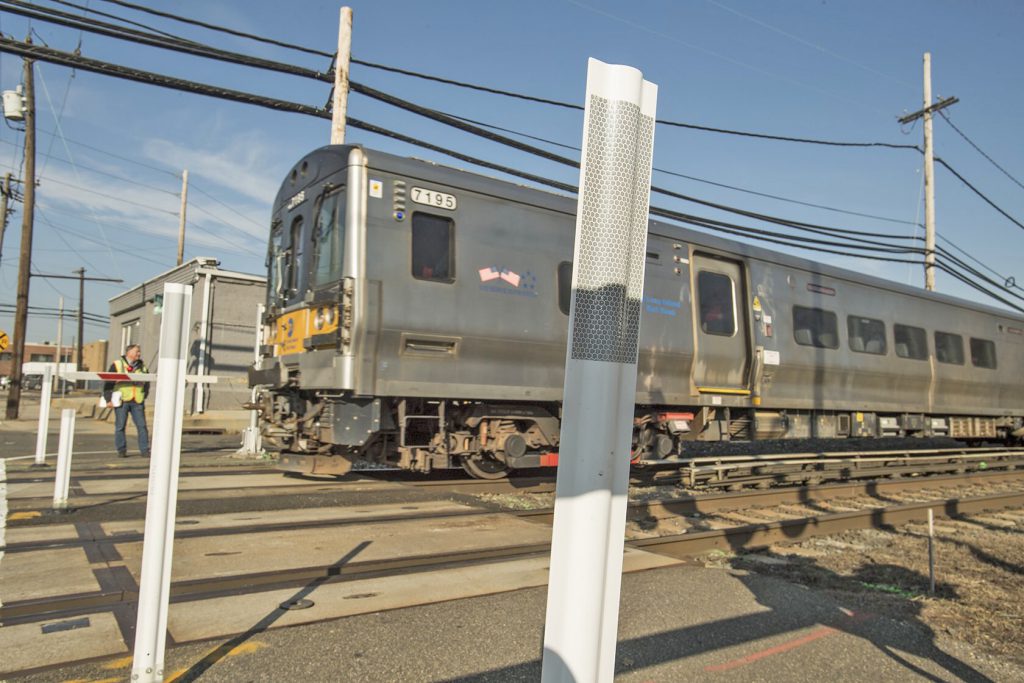 As part of its LIRR Forward initiative, in June 2018 the Railroad installed flexible, four-foot high reflective delineators, roadway markings, and additional reflective devices to better alert drivers and keep them from getting confused and turning onto railroad tracks, particularly drivers who are using GPS during inclement weather or in darkness. 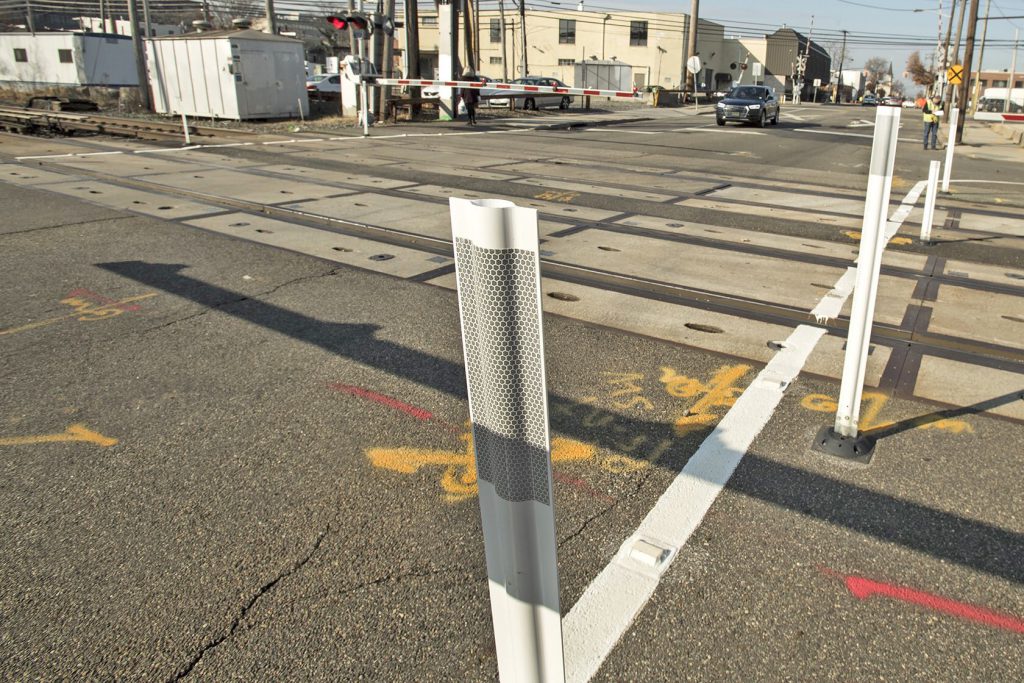 “I am pleased that our efforts to constantly implement and innovate our safety methods has had a dramatic effect on eliminating incidents at grade crossings,” said LIRR President Phil Eng. “While we can’t control driver behavior, we continue to be proactive and keep our trains moving safely. We have truly benefitted from our partnership with Waze and are proud to pave the way for railroads across the country in using this collaborative technology.”

“Unlike an underground subway system, commuter railroads have to contend with drivers at grade crossings, a common element of traffic safety that the MTA and the FRA are trying to mitigate with new strategies,” said MTA Managing Director Ronnie Hakim. “Kudos to MTA Long Island Rail Road for their successful approach to this problem.”

Last month, the Volpe National Transportation Systems Center included the Long Island Rail Road’s implementation of delineators, road striping and reflective markings at grade crossings as part of its published research for the Federal Railroad Administration (FRA) into grade crossing right-of-way incursion treatments. Volpe compared delays, reports of cars on tracks entering through the grade crossing due to mistakenly turning onto the tracks, and actual collisions with trains for a period one year before, June 2017 through May 2018 and one year after the installations, June 2018 through May 2019. The study concluded that there was an 85 percent reduction in vehicles mistakenly turning onto the track at LIRR grade crossings. The study also points to an 86 percent reduction in the number of trains delayed due to reports of vehicles on tracks. Between June 2017 and May 2018, the year before the delineator program was introduced, there were 21 car-on-the-track incidents. The number of vehicles errantly turning on the tracks where delineators were installed dropped to zero for the same period post-installation. The entire report is available here. 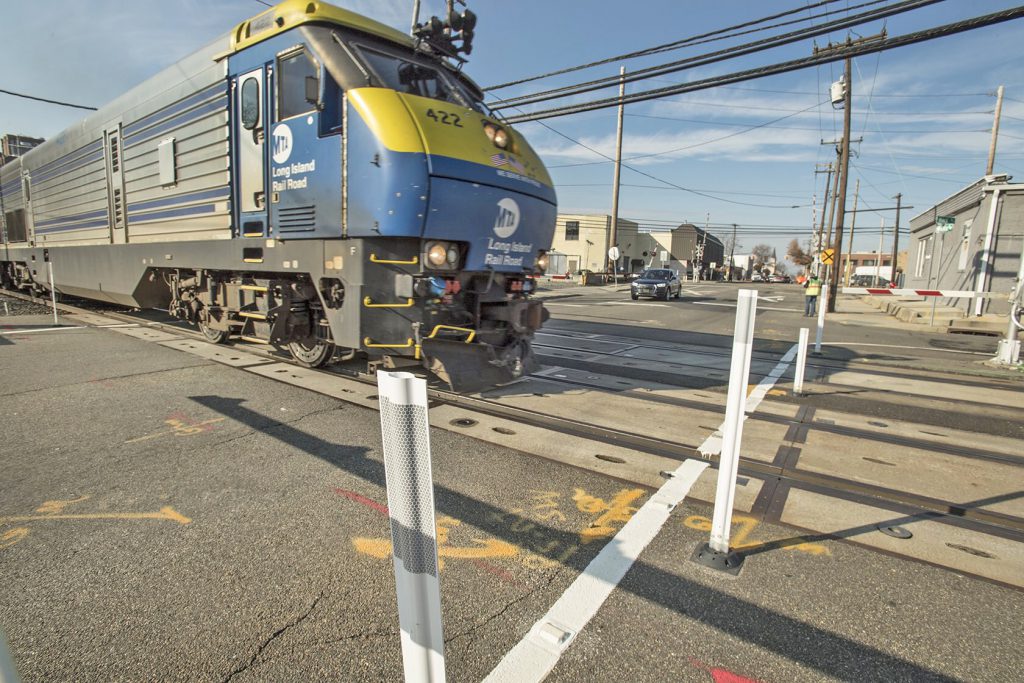 Between June 2018 and May 2019, train delays due to reports of cars inadvertently turning on the tracks dropped to 57, compared to the same period between June 2017 and May 2018, when there were 401 train delays due to cars inadvertently turning on tracks where delineators were in place. The result? 344 fewer trains delayed and 138 fewer delay hours.

Nassau County Executive Laura Curran said: “The Long Island Rail Road’s delineator and Waze integration is a great example of how technology and innovation really work to make train travel safer for the people of Long Island. I have been a proponent of investing in modernization across LIRR in order to improve safety, alleviate congestion and strengthen the future of Long Island’s economy.”

Suffolk County Executive Bellone said: “Under the leadership of President Phil Eng, the Long Island Rail Road has set a national standard for safety. I commend the LIRR for their innovative leadership and new partnerships, which have dramatically improved safety and visibility for our motorists at historically dangerous railroad crossings.”

State Sen. Kevin Thomas said: “Unauthorized rail crossings are a serious safety concern. With the rise of GPS, many drivers were inadvertently driving onto the railroad tracks after misunderstanding their GPS directions, causing delays and risking lives. I commend the MTA Long Island Rail Road for quickly identifying the issue and working to implement effective solutions. These cutting-edge safety methods have dramatically improved safety and reduced train delays across our communities.”

Metro-North Railroad is also adopting the integration program along with their ongoing safety initiatives. The implementation of all technologies has significantly enhanced safety in the communities served by LIRR and Metro-North and improved the customer experience.

The LIRR Modernization Program is a multibillion dollar investment in the regional transportation infrastructure that aims to foster Long Island’s economic growth for generations to come. This comprehensive program to reconstruct and improve the LIRR system is moving forward with planning, design and construction. These projects range from large system expansion efforts, such as the LIRR Expansion Project from Floral Park to Hicksville, East Side Access and the Double Track Project from Farmingdale to Ronkonkoma, to improvements to existing infrastructure, such as substation replacements and station enhancements. Collectively, these projects will work together to improve the overall LIRR system efficiency and reliability.

Each discrete project works to advance the goal of modernizing Long Island’s transportation system. Through these modernization efforts, traveling on the LIRR will become faster, more reliable and more comfortable. The program will provide more commuting options between New York City and Long Island as well as intra-Island service. It is vital that these improvements to the LIRR system happen now to make working and living on Long Island easier and to ensure Long Island’s economic prosperity for the next century. For more information please visit AModernLI.com.