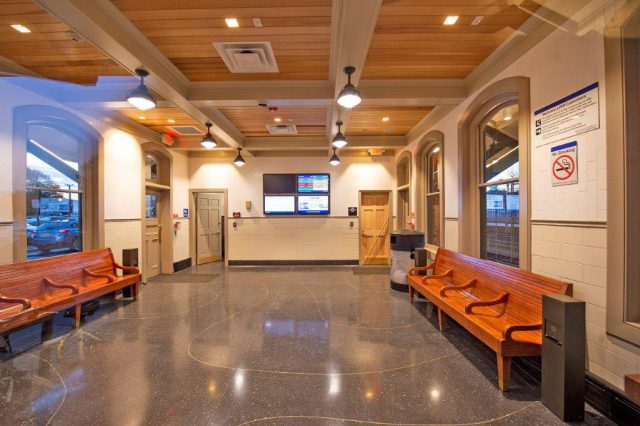 The Bethpage Black Course on Long Island is hosting the PGA Championship this week, May 13 to 19, for the first time ever. Previously the site of two U.S. Opens, the park’s legendary Black Course, designed by golf architect A. W. Tillinghast and opened in 1936, is generally deemed the best public golf course in the county and one of the few chosen for major tournaments.

Beyond the course itself, this year’s PGA showdown is unique in other ways. The field includes every player in the top 100 world golf ranking, 16 PGA champions, 69 international players from 27 countries and, of course, Tiger Woods, who had an incredible comeback win at the Masters in April.

Bethpage Black is a short distance from the newly-renovated LIRR Farmingdale Station, and the LIRR is expecting to carry up to 18,000 fans per day out to the green. With no parking allowed at Bethpage State Park or at Farmingdale Station, the Railroad is the best way to avoid traffic and parking hassles. For many, it’s also part of the Bethpage tradition. LIRR will be running extra trains to and from Farmingdale, and free PGA shuttle buses will carry spectators from the station to the course.

With years of experience ferrying fans to sports extravaganzas, LIRR is fully prepared and quite excited to welcome golf fans to historic Farmingdale Station, which the Railroad recently finished renovating. The overhaul carefully preserves the station’s brickwork façade and historical character, with terrazzo flooring, wood finishes and vintage photographs. The station, built in 1890, is listed on the National Register of Historic Places.

In addition to its incomparable aesthetics, the old stationhouse has received numerous upgrades and amenities, including new ADA-accessible restrooms; electrical, plumbing, and HVAC upgrades; bike racks; USB charging ports at technology counters; LCD information displays, and much more. Getting around the station is easier too, thanks to a rehabilitated pedestrian underpass and new wayfinding signage.

In addition to the notoriously difficult Bethpage Black, Bethpage State Park has four other public golf courses built in the 1930s, the Yellow, Green, Blue, and Red courses. This unusual state park was dubbed “the people’s country club,” by its creator, none other than Robert Moses, the founding father of what is today MTA Bridges and Tunnels.

You can read about the enhancement of Farmingdale Station and other LIRR station modernization and upgrade projects at AModernLI.com.