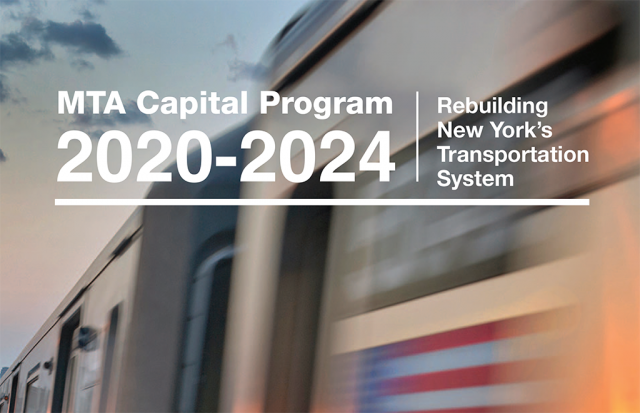 On September 25th The Metropolitan Transportation Authority (MTA) Board unanimously approved a proposed 2020-2024 Capital Program that invests $51.5 billion into the region’s subways, buses and railroads over the next five years to institutionalize and build on the progress of the Subway Action Plan and create a faster, more accessible, and more reliable public transportation system.

The proposed level of investment is the highest in the MTA’s history, increasing spending on infrastructure by 70% over current levels, which were already the highest ever. The program plans to invest more than $40 billion in New York City Transit’s subways and buses alone – including crucial signal upgrades – as well as major investments in the Metro-North Railroad and Long Island Rail Road.

$5.7 Billion of the proposed capital plan will be invested in the Long Island Rail Road. The plan makes the investments necessary to enable a historic transformation of the Long Island Rail Road by the planned December 2022 opening of East Side Access and Main Line Expansion. East Side Access will allow more than 160,000 daily customers to travel to Grand Central Terminal, saving commuters up to 40 minutes per day. Main Line Expansion will add a third track on 10 miles of the Main Line corridor, used by 40% of LIRR customers. These projects, along with Jamaica Capacity Improvements, will enable a 60% increase in reverse commute and a 50% increase in peak service between Manhattan and Long Island.

“The modernization of the LIRR that has begun in recent years will continue under this program,” said LIRR President Phil Eng. “Not only will it enable us to continue to accelerate our systemwide core improvements to service safety, accessibility, reliability and comfort, it will enable us to sustain and grow Long Island’s economy and quality of life for the entire region.”

Track Upgrades | $1 billion | The LIRR will install concrete ties and continuous welded rail to increase durability, reliability and customer comfort. The railroad will upgrade and reconfigure infrastructure at Jamaica to improve reliability. This will bring more than 90% of track assets to a state of good repair.

Station Accessibility and Improvements | $910 million | The LIRR will make seven additional stations accessible in accordance with the Americans with Disabilities Act; 93% of stations, serving 97% of customers, will be accessible. The LIRR will bring component work and upgrades benefitting up to half of all riders to more than 20 stations, including platform, elevator and escalator replacements.

Signals and Switches | $364 million | In accordance with the LIRR Forward plan to accelerate infrastructure renewal and improve train reliability, the LIRR will replace 32% of switches, 21% of track circuits and 11% of grade crossing equipment at the locations with highest maintenance needs. The railroad will upgrade signals and interlockings on three branches that are technologically obsolete. The total also includes spending on enhanced communications equipment.

Rolling Stock | $487 million | The railroad will purchase 160 M9A new electric cars, expanding the fleet by 13%. Fleet growth allows for at least 25,000 more seats into Grand Central during the morning rush hour. The LIRR will purchase nearly 20 coaches and more than 10 locomotives serving the railroad’s non-electrified territory.

The plan, which the MTA unveiled earlier this month, will be submitted by Oct. 1 to the MTA Capital Program Review Board for consideration and approval. The review board, which is independent of the MTA, is composed of representatives from the Governor, the New York State Senate and Assembly, and the Mayor of New York City. Details of the projects included the proposed capital program are available at https://new.mta.info/2020CapitalProgram. The entire press release is available here.