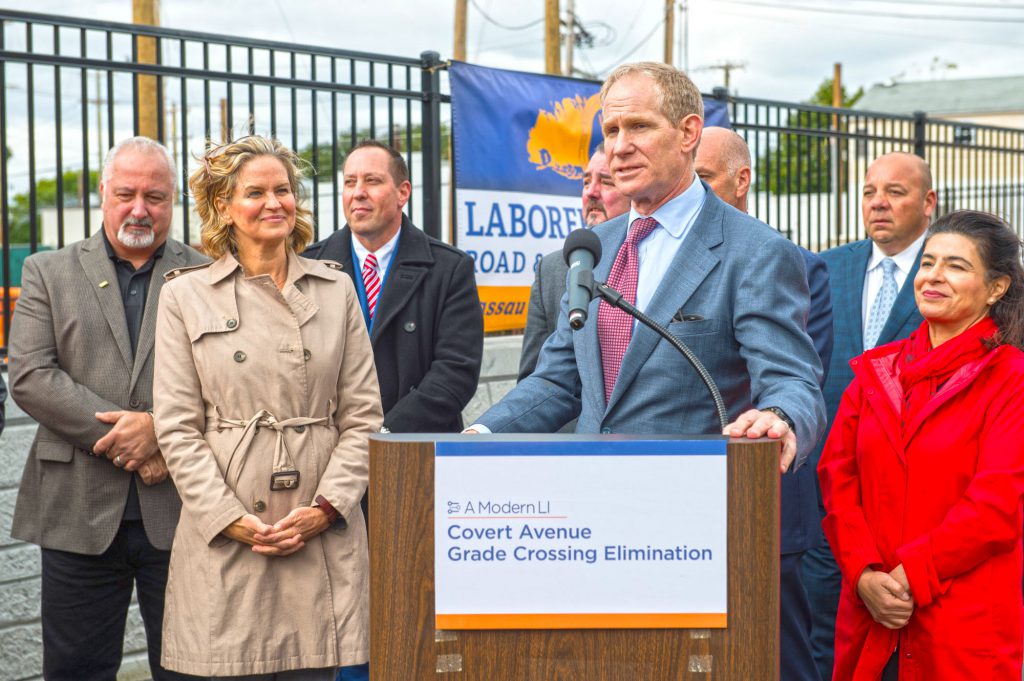 On Thursday, MTA and LIRR leadership were joined by elected officials and labor leaders at Covert Avenue in New Hyde Park to mark the reopening of the roadway to traffic — on schedule — after just six months. The roadway is the second of eight Long Island Rail Road grade crossings to be completely eliminated through the LIRR Expansion Project.

Most of the crossings, including the one at Covert Avenue, are being transformed into underpasses, which enhance railroad safety, improve traffic flow in communities of Nassau County, and reduce localized nuisances from horns and bells. The roadway was officially opened on Saturday, October 12, at 4 p.m., in exactly six months, as promised by the project team. 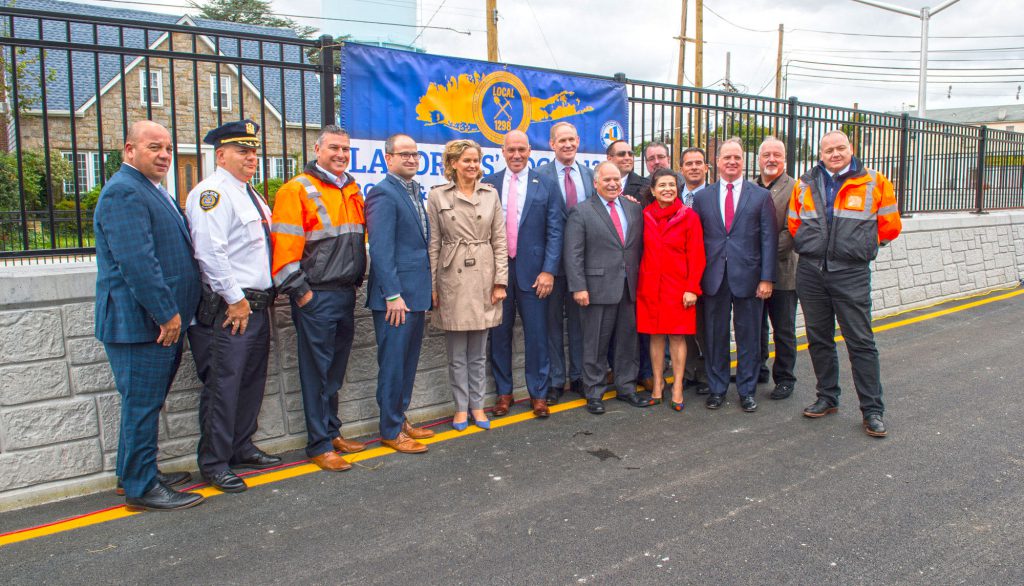 “Grade crossings have the potential to be extremely dangerous for drivers and LIRR passengers alike, and we’ve made a concerted effort through the LIRR Expansion Project to remove the ones that aren’t absolutely necessary,” Governor Cuomo said in a statement. “These upgrades are part and parcel with our ongoing mission to reduce frustrating delays and help ensure New York’s transportation infrastructure is capable of supporting our 21st century economy.”

The Covert Avenue crossing had been closed to traffic on April 15. The new bridge was put into place during the weekend of Aug. 24-25 using an approach called “box-jacking” that reduces the length of time the tracks must be taken out of service to just one weekend. 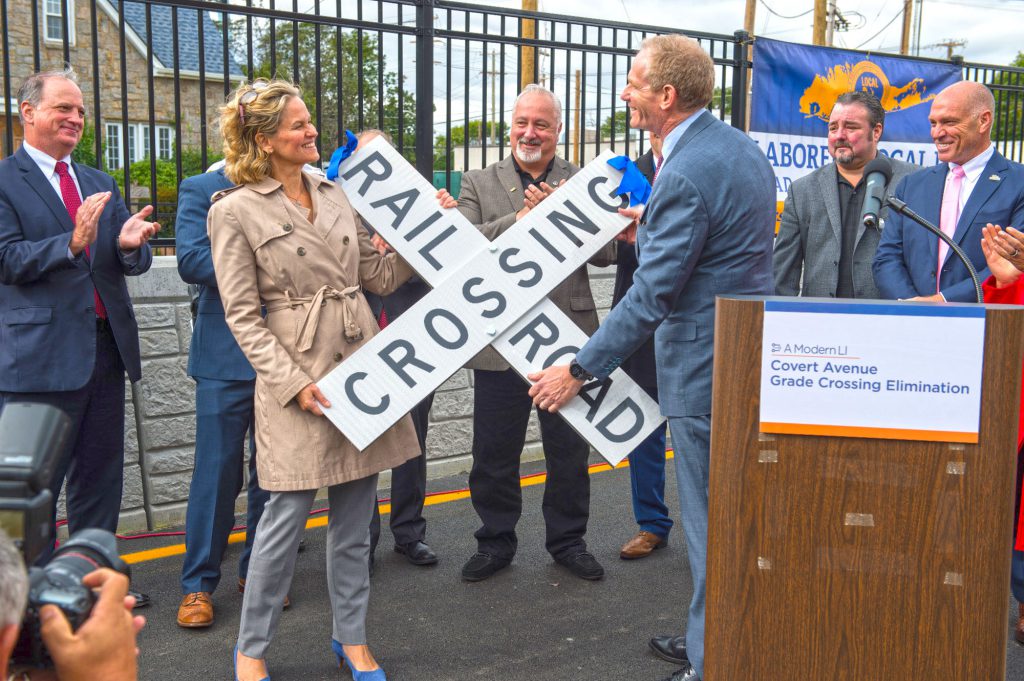 Under this approach, workers built a 140-ton concrete structure onsite that includes the rail bridge, the 40 feet of roadway beneath the bridge, and the side walls connecting roadway below with rail bridge above. They then used powerful hydraulic jacks to inch the structure into place over the course of one weekend.

The roadway reopening is the fifth major bridge or grade crossing project to be completed over the past 18 weeks along the LIRR’s Main Line as part of the LIRR Expansion Project. On June 1-2, the MTA replaced the LIRR’s Cherry Lane Bridge in Carle Place, and on Aug. 17-18, crews added a new bridge over S. Tyson Avenue in Floral Park. On Sept. 5, crews reopened Urban Avenue in New Cassel, replacing a previous an at-grade crossing. Crews replaced the LIRR’s 108-year-old Nassau Boulevard Bridge in Garden City Oct 5-6.

MTA Chief Development Officer Janno Lieber said, “The LIRR Expansion Project is moving forward at an extraordinary pace, which is why it is the model project for how we are changing the way we manage large capital projects to do them better, faster and cheaper. We are keeping this pace up over the next 35 months because we have four more bridges to replace and six more at-grade crossings to eliminate in that time.”

LIRR President Phillip Eng said, “With each grade crossing that is eliminated, our railroad gets safer. Our efforts to improve safety and reliability through the LIRR Forward Plan are reinforcing the work being done along the Main Line to eliminate crossings and expand and modernize our infrastructure.”

Senator Anna M. Kaplan said, “This project has been a win-win-win, simultaneously increasing capacity for the Long Island Railroad, improving public safety, and reducing local traffic. Most importantly, by completing this project on time, on budget, with limited disruption, and with significant community outreach, it shows that the MTA is committed to finding new, innovative solutions to yesterday’s problems. I applaud the hard-working men and women who worked tirelessly on this great achievement, and I thank Governor Cuomo for setting an ambitious agenda to improve the MTA and modernize the Long Island Rail Road.”

Nassau County Executive Laura Curran said, “With the completion of the Covert Avenue project, residents can now enjoy a safer and more livable community while commuters will benefit from improved infrastructure and efficiency. This is another milestone reached for the LIRR Expansion Project, which will play a big role in supporting transit-oriented development throughout Nassau County, helping spur growth in our communities for generations to come.”

Town of Hempstead Supervisor Laura Gillen said, “This reconstructed grade crossing will greatly enhance safety and improve the flow of traffic in one of the busiest areas of our Town. This is also a major victory for the environment, as thousands of vehicles will no longer be forced to idle every time a train pulls into the station. I would like to thank the Village of New Hyde Park, the Long Island Railroad and Governor Cuomo for their leadership and hard-work in bringing this project to a speedy completion for the benefit of all.”

The LIRR Expansion Project is part of a multibillion-dollar modernization of the Long Island Rail Road, the largest investment the railroad has received in decades. Once the work is complete, scheduled for 2022, the LIRR will have increased its capacity by roughly 50 percent. Together, the upgrades will help transform transportation across the region and provide a reliable, state-of-the-art rail system for Long Islanders. For more information, please visit the LIRR Expansion Project Floral Park to Hicksville project page on AModernLI.com.