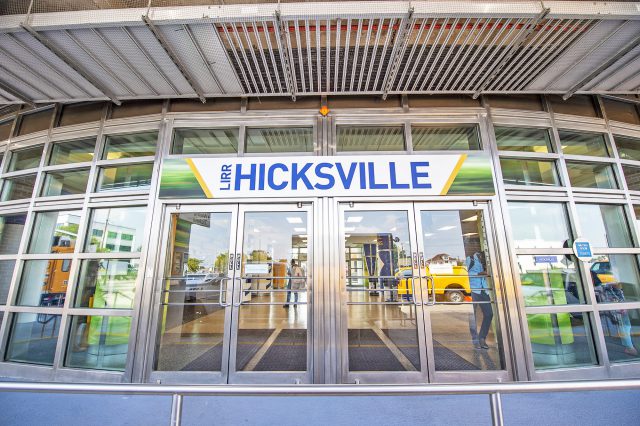 The newly-rebuilt Hicksville Station, the busiest LIRR station on Long Island, continues to provide improved, more reliable train service and an outstanding customer service experience. Since the $132 million project was completed in 2018 as part of the $6.6 billion LIRR Modernization Program, a record number of passengers are using the station. 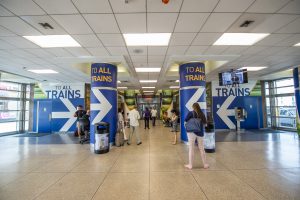 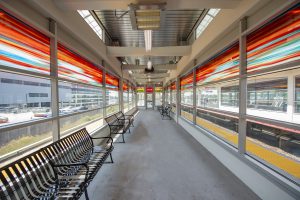 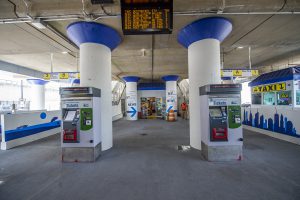 MTA Arts & Design has enhanced the station with ceramic mosaic murals and laminated art glass designed by Roy Nicholson, a long-time Long Island resident and husband of Newsday art critic Helen Harrison. Nicholson’s “Hempstead Plain, Morning & Evening (2018)”, has been installed at the station. In 2002 Nicholson created glass mosaic artwork for the Hicksville station ticket office and waiting room; when the station underwent its renovation and modernization in 2018, Nicholson was invited back to expand the project to the new waiting rooms on the rebuilt station platform. 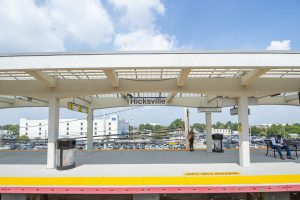 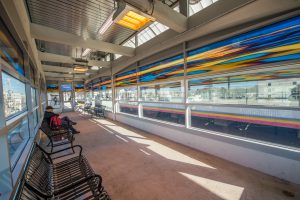 In tandem with the $132 million renovation of the Hicksville LIRR Station, the town has received $10 million in Downtown Revitalization Initiative (DRI) awards funds for four transformational projects for its downtown. The projects, nominated by the Downtown Hicksville Revitalization Local Planning Committee, will support increased access to transportation, improve walkability, and attract new housing opportunities.  The centerpiece of these proposals links the train station to Broadway and the rest of downtown to incentivize private development and job creation.  Together, these plans will create new public open space, decrease automobile congestion, improve pedestrian safety and encourage residents and visitors to spend more time in downtown Hicksville supporting local businesses.

“The rebuilt Hicksville station is not just geographically representative of the transformation of the LIRR, it’s also demonstrates how quickly we can bring real service improvements and amenities to LIRR customers,” said Philip Eng, President of the Long Island Rail Road. “The way we rebuilt this station, on budget and ahead of schedule, while continuing to offer service throughout the construction, is emblematic of the way we’re approaching the full-scale transformation of the entire Long Island Rail Road. We’re re-thinking the way we tackle complex challenges, so we can bring the benefits that matter to our customers, on budget and ahead of schedule.”