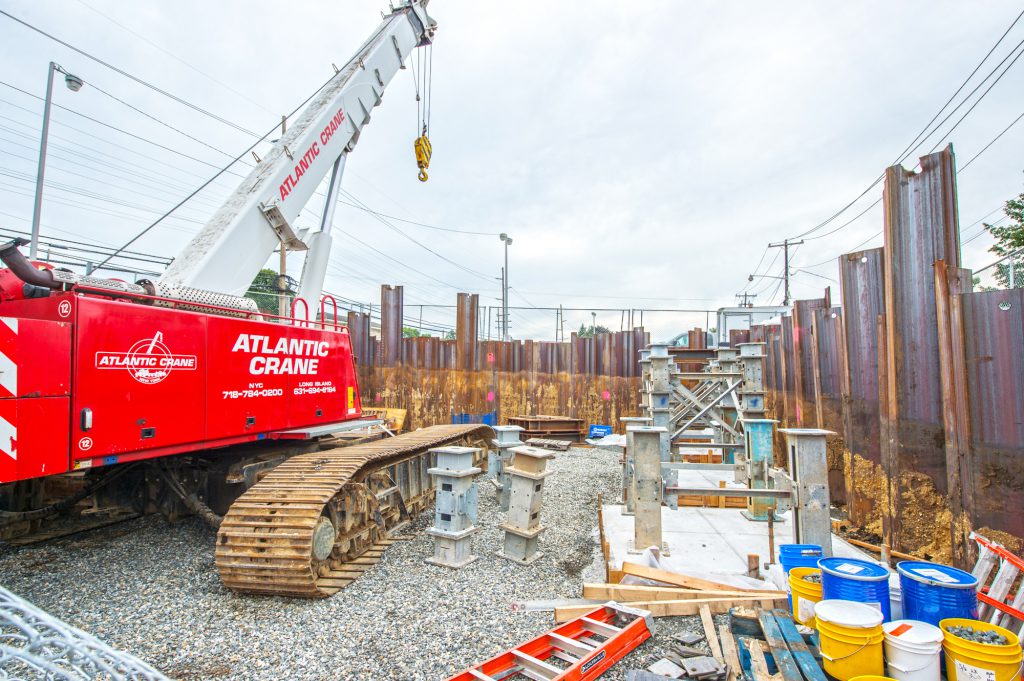 The Nassau Boulevard Bridge, located in the Village of Garden City along the LIRR Main Line, is scheduled to be removed and replaced with a three-track structure as part of the LIRR Expansion Project over a single weekend, October 5-6. During that weekend, the existing bridge will be removed and the new one will be lifted and rolled into place. Following the “roll-in,” tracks, power, communications and other systems will be reinstalled in time for the morning commute on Monday, October 7. 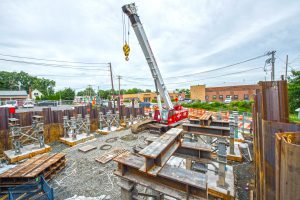 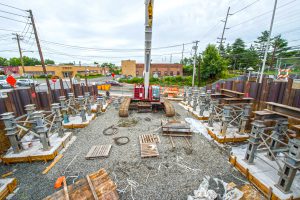 To complete the work on time, the Main Line will be taken out of service beginning early Saturday morning, October 5. A detour map can be viewed below: 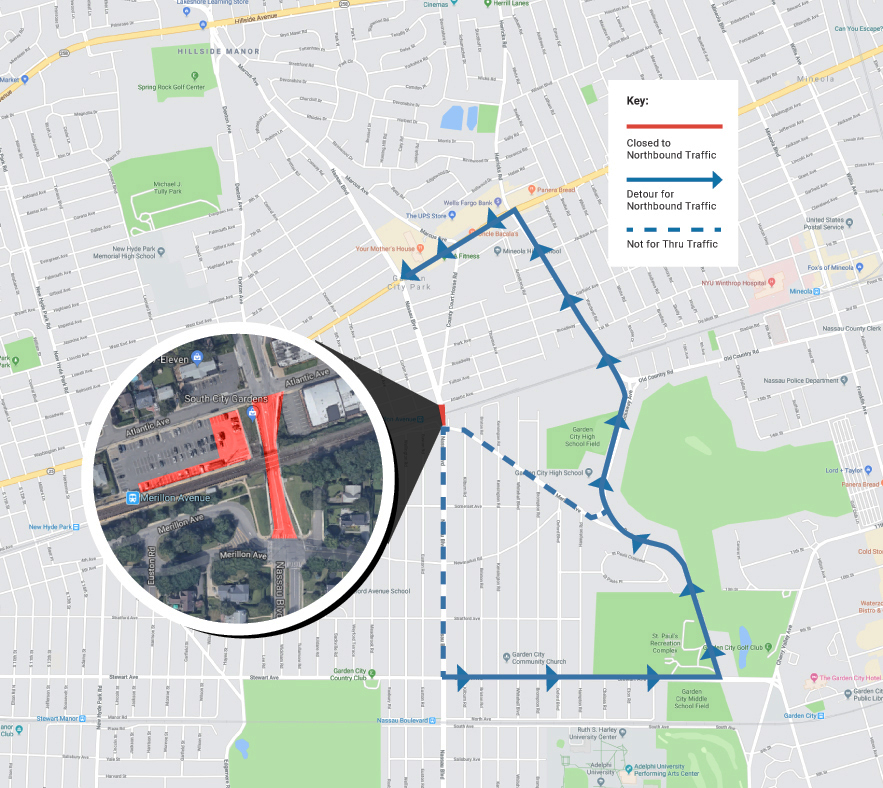 This low-hanging bridge, which is currently 11’ 6”, has been the site of many accidents over the years by trucks striking it, resulting in train delays in both directions while LIRR crews worked to determine the bridge’s safety and structural stability before restoring normal train service. The new bridge, which is being assembled from sections delivered to the site at the northwest corner of Nassau Boulevard and the Main Line, will be 14’ high.

The installation of retaining and sound walls will improve the quality of life for residents living near and around the LIRR tracks. From Denton Avenue to Nassau Boulevard, support of excavation work has begun in advance of the construction of a retaining wall along the south side of the tracks, and crews have begun the installation of a ground-mounted sound wall parallel to the retaining wall. From Nassau Boulevard to Herricks Road crews will continue to install wall sections, on top of the existing retaining wall, along the north side of the tracks. 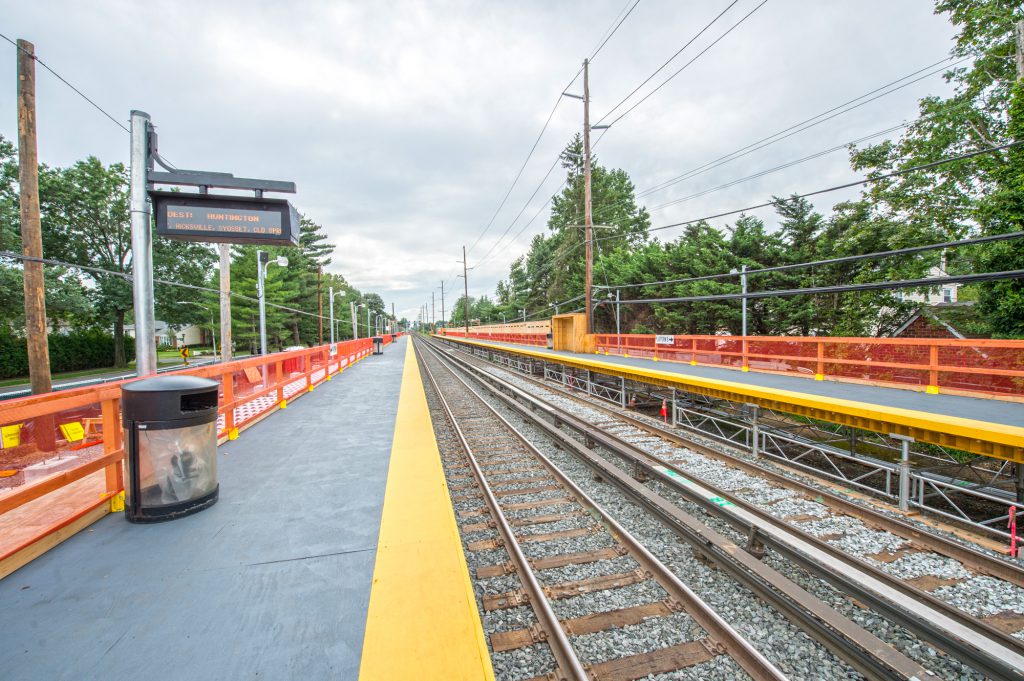 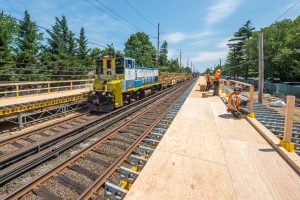 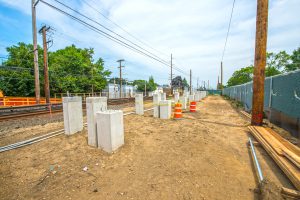 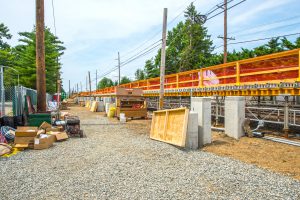 Just to the west of the new Nassau Boulevard Bridge is the Merillon Avenue Station, which was built in 1912 and last refurbished in 1958. The station serves the Main Line and the Port Jefferson Branch and is being totally rebuilt to enhance service to its nearly 1,900 weekday customers. Enhancements to the station include: platform removal and replacement to accommodate a new third track and longer 12-car trains; platform canopies; new platform furnishings and accouterments including benches, shelters and signage; CCTV security cameras to improve safety; ADA-compliant mobility improvements including elevators and ramps; free public Wi-Fi; USB charging stations and digital information displays. Watch a video interview with MTA Assistant Project Manager Noelle McKoy here:

The western halves of the platform on the north and south sides of the tracks were removed in June and July. Following the roll-in of the new Nassau Boulevard Bridge, the eastern half of the Merillon Avenue Station platform will be demolished. The new platforms will accommodate longer 12-car trains, instead of 10-car trains. Elevators are being built from the ground to the platform.

Enhancements to Merillon Avenue Station are part of a broader LIRR initiative to strengthen the reliability and resiliency of LIRR infrastructure as well as support the growth and development of Long Island. For more information, and photos of ongoing construction, please visit the Merillon Avenue Station project page on AModernLI.com – http://www.amodernli.com/project/merillon-avenue-station-enhancement/.

The LIRR Expansion Project Floral Park to Hicksville will add a third track along the 10-mile-long corridor, reducing train congestion and delays and enabling true bi-directional service during peak hours. This transformative work includes several related projects, including the construction of additional parking garages and improved station access, retaining and sound attenuation walls, widening and improvements to rail bridges and the removal of the eight street-level railroad crossings in the corridor. Construction is being handled in a way to minimize the impact on daily routines, with extensive mitigation and public outreach efforts to local communities.

The LIRR Expansion Project is part of a multibillion-dollar modernization of the Long Island Rail Road, the largest investment the railroad has received in decades. Once the work is complete, the LIRR will have increased its capacity by roughly 50 percent. Together, the upgrades will help transform transportation across the region and provide a reliable, state-of-the-art rail system for Long Islanders. For more information and photos of ongoing construction, please visit the LIRR Expansion Project Floral Park to Hicksville project page on AModernLI.com – http://www.amodernli.com/project/thirdtrack/.