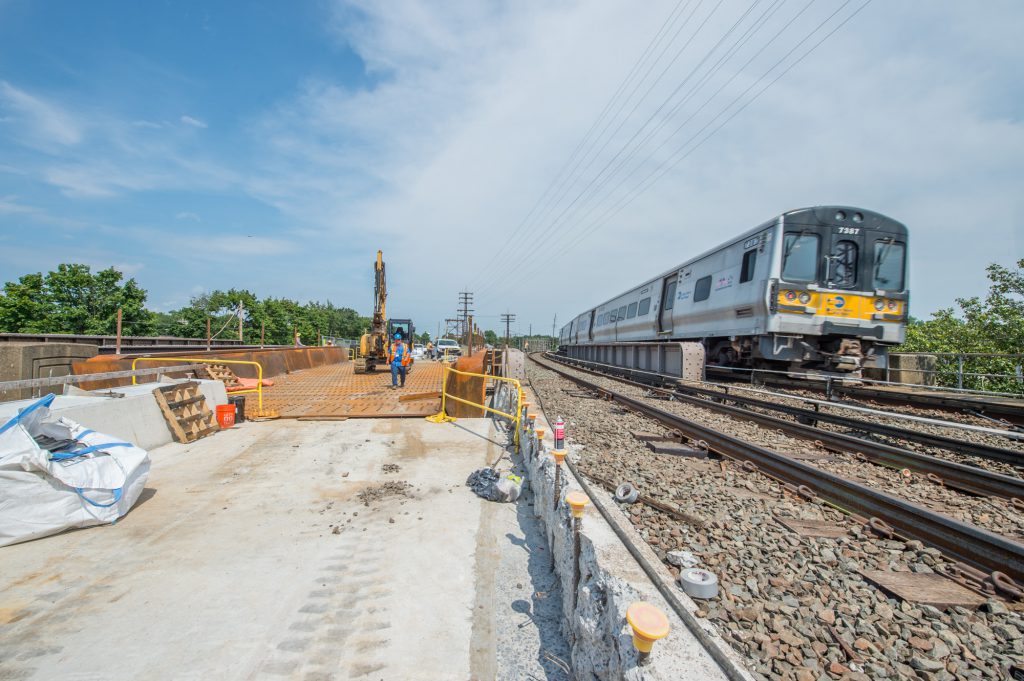 The South Tyson Avenue Bridge in the Village of Floral Park will be lifted and rolled 13 feet into place during a double track outage on the Hempstead Branch over the weekend of August 17th and 18th, with full service to be restored for Monday morning peak service on August 19th. 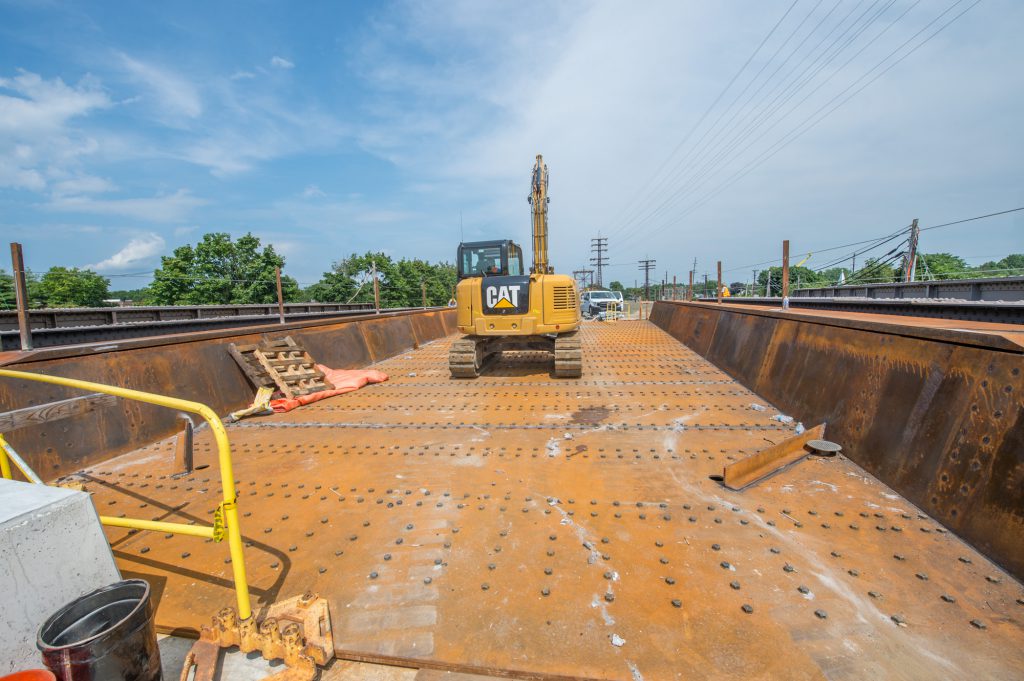 The bridge, in service since 1958, is being modified, and a new two-track bay bridge is being installed to address an existing Main Line bottleneck – where four tracks merge into two – to create room for a new third track. The bridge spans South Tyson Avenue adjacent to the Floral Park Viaduct, an elevated concrete structure supported by concrete column piers west of South Tyson Avenue. 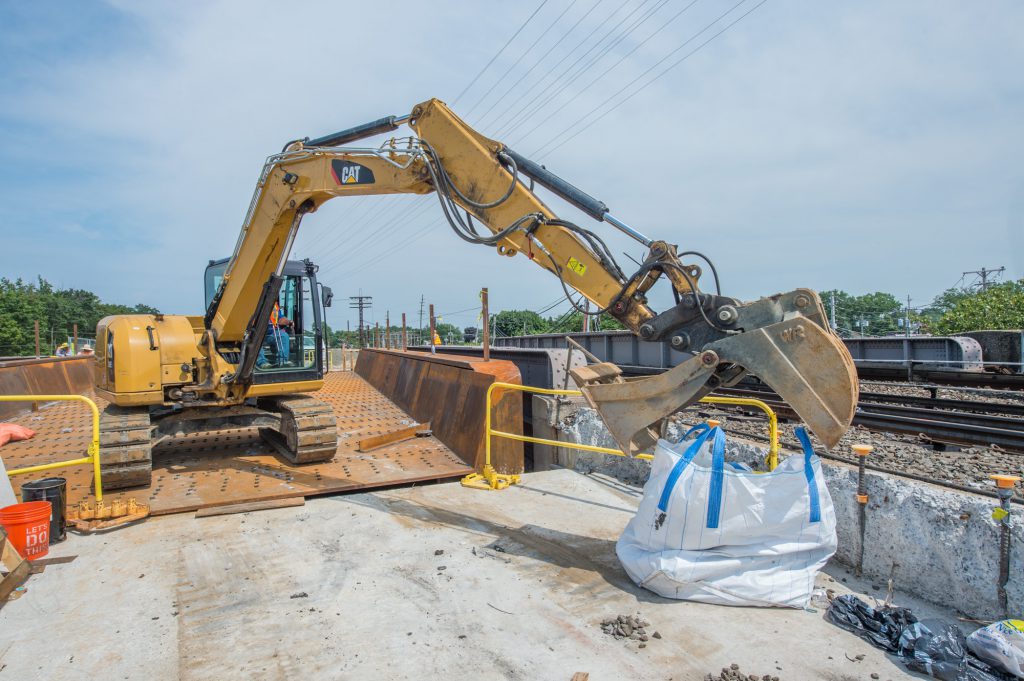 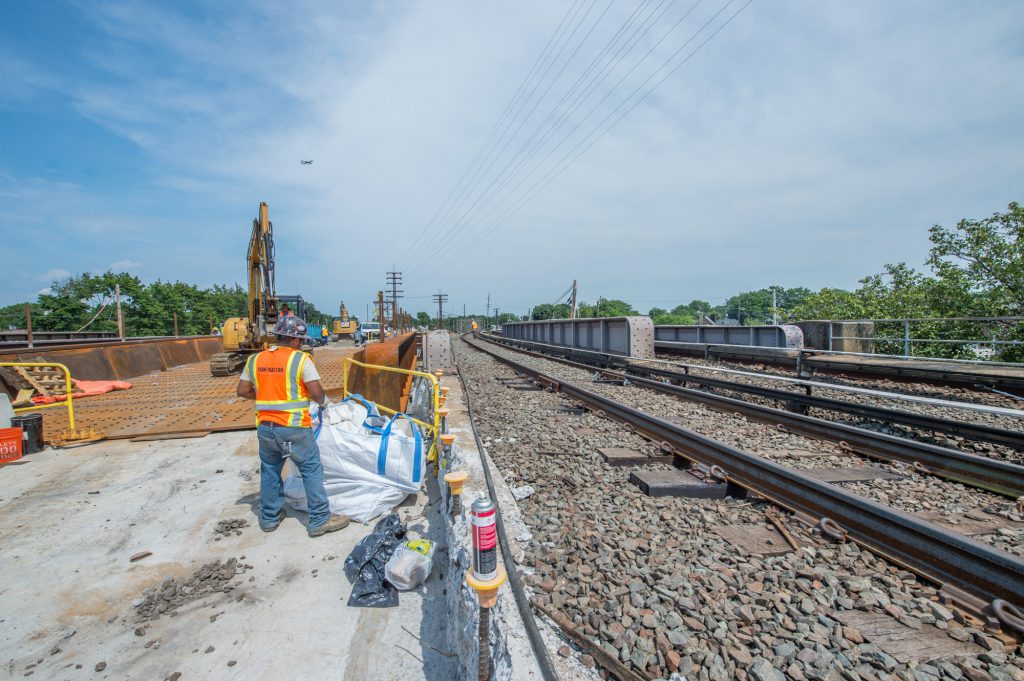 Work on the viaduct began in November 2018 with the installation of support of excavation for the pier and column footings: columns were installed by the end of January 2019, followed by the construction of the concrete deck to support the third track coming from the Hempstead Branch. Bridge construction began with the demolition of the wing wall in April of 2019, followed by the extension of the abutment. Construction on site of the new bridge at track level immediately followed. For more information and construction photos, please visit the South Tyson Avenue Bridge Modification project page on AModernLI.com – http://www.amodernli.com/project/south-tyson-avenue-bridge-modification/.

The LIRR Expansion Project Expansion Project Floral Park to Hicksville will add a third track from Floral Park to Hicksville, reducing train congestion and delays and enabling true bi-directional service during peak hours. This transformative work includes several related projects, including the construction of additional parking garages and improved station access, retaining and sound attenuation walls, improvements to rail bridges and the removal of the eight street-level railroad crossings in the corridor. Construction is being handled in a way to minimize the impact on daily routines, with extensive mitigation and public outreach efforts to local communities.

The LIRR Expansion Project is part of a multibillion-dollar modernization of the Long Island Rail Road, the largest investment the railroad has received in decades. Once the work is complete, the LIRR will have increased its capacity by roughly 50 percent. Together, the upgrades will help transform transportation across the region and provide a reliable, state-of-the-art rail system for Long Islanders. For more information and photos of ongoing construction, please visit the LIRR Expansion Project Floral Park to Hicksville project page on AModernLI.com – http://www.amodernli.com/project/thirdtrack/.