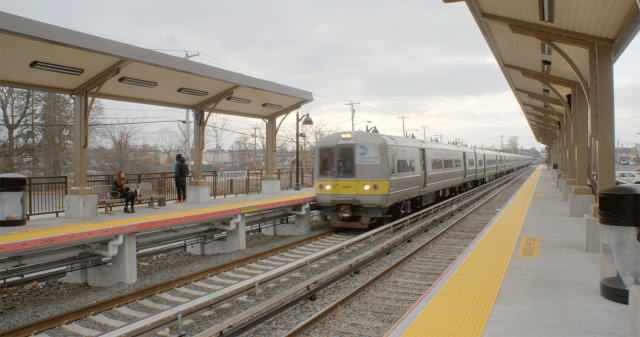 At about 9:15 a.m. on Monday, February 4, a broken rail was discovered on LIRR’s Ronkonkoma Branch near Deer Park on Long Island. LIRR workers responded, fixing the rail by 11:45 a.m., enabling LIRR to operate around the site of the broken rail with minimum service impacts. All thanks to the completion of the Double Track project that has added an uninterrupted second track on the Ronkonkoma Line between Farmingdale and Ronkonkoma.

Previously, trains on the branch had only one track on which to operate on this line segment. Had the Double Track project not been completed, this incident would have resulted in a suspension of train service east of Wyandanch, requiring buses to substitute for trains. This and similar incidents that otherwise would have jammed up service in both directions are now proving to be minor issues.

Double Track has introduced 13 miles of a brand-new second track between Farmingdale and Ronkonkoma on the Ronkonkoma Branch, which serves nearly 48,000 customers each weekday. The project features new platforms at Wyandanch and Pinelawn stations to better accommodate longer trains and ease boarding and exiting, and new signal equipment to enhance reliability and safety.

The project underscores how the MTA is working to provide better service and build projects faster.

The MTA finished the $431 million project well ahead of schedule at the direction of Governor Andrew M. Cuomo. The project management team used innovative track-laying technology that lays rail 10 times faster, which it combined with a productive design-build approach to bring the project to customers sooner and ultimately freeing up LIRR resources for other projects supporting LIRR’s expansion and modernization, including Positive Train Control, East Side Access, Main Line Third Track (LIRR Expansion Project) and Ronkonkoma Yard.

The MTA is delivering major projects that improve lives and help businesses grow. The LIRR will fully realize Double Track’s benefit after the completion of the Main Line Expansion and East Side Access projects, which will function together to unlock greater system capacity.