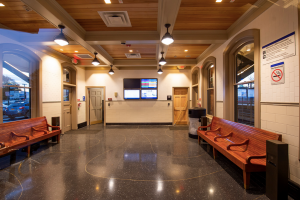 The doors to Farmingdale’s upgraded station building were opened today. The station, located along the Ronkonkoma Branch in Suffolk County, serves more than 3,800 daily customers. Listed on the National Register of Historic Places, Farmingdale Station, originally built in 1890, has long been a part of this community. Its facade was fully restored to its original historical brick architecture, capturing and preserving its history and character: historic photos will be placed alongside a commemorative plaque in remembrance of its past.

The work at Farmingdale station, which is still ongoing, is part of an $84 million, eight-station renovation package, awarded earlier this year. The work at Wantagh Station was funded through the current MTA Capital Program. Further upgrades to come include: