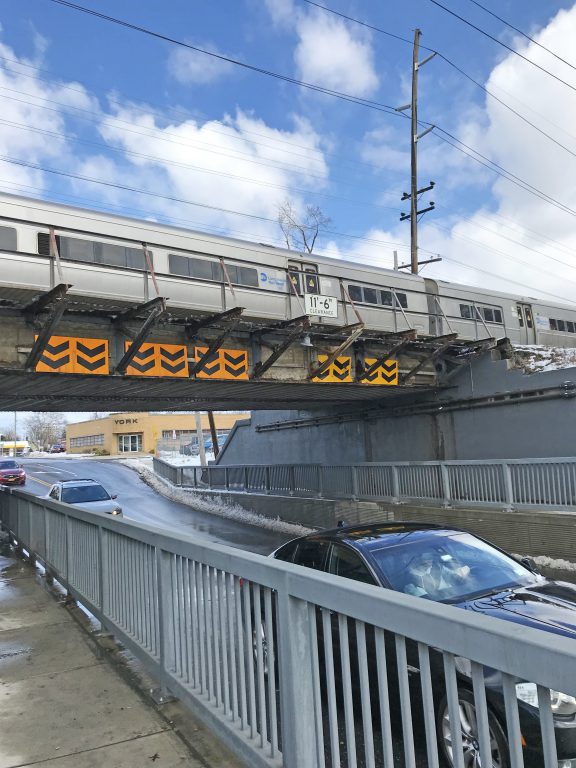 The Nassau Boulevard Bridge, a low-hanging bridge, has been the site of many truck strikes over the years, resulting in train delays in both directions while LIRR crews worked to determine the bridge’s safety and structural stability before restoring train service. The bridge is slated to be removed and replaced with a three-track structure, to accommodate the LIRR Expansion Project, with anticipated completion of the project at the end of October 2019.

Initially there will be some overnight work. From approximately 7:00 p.m. to 3:00 a.m., one lane of Nassau Boulevard will be closed: flaggers and signage will direct drivers to proceed north and south in an alternating fashion along the remaining open lane. Overnight work is solely for the demolition portion of the project and should last approximately one to two weeks; remaining work will be completed during daylight hours.

To minimize disruptions during the busy daytime hours and to accelerate completion of this project, the initial demolition will occur in the overnight hours for approximately the next two weeks. Maintaining a safe and reliable operation is the contractors’ top priority, and traffic lanes will remain open during most work hours over the course of the four-month construction period. As this will be an active construction area, and to ensure the safety of drivers, pedestrians and workers, there will be occasional, partial and full road closures. Signage will be posted.

In coordination with Village of Garden City officials, the LIRR Expansion Project team has developed a traffic management plan to guide drivers along alternate routes when necessary. Additionally, at least one pedestrian sidewalk under the bridge will remain accessible during the construction period.

The Nassau Boulevard Bridge is one of seven bridges along the LIRR Main Line being modified. On June 2nd, the Cherry Lane Bridge in Carle Place was replaced in a similar fashion and along a similar timeline.